I hit a milestone on Friday, filling the final page of my last personalized journal that includes my husband’s photo on the front. I’d ordered these journals with a coupon code long before David died. This particular company, which has since gone out of business (I wonder why), offered a $15 code to customers quite often. Every time they did, I’d order a free journal. Then I’d stick it in a cabinet, not sure what I was going to do with them all.

It seemed a perfectly reasonable thing to do; pulling one of the three with our picture emblazoned on the front out of the cabinet the morning after David died. Expressive writing can be very healing. I filled that first journal in less than seven months, and began another. By the time I filled that one, it had been three years since my husband had died. It didn’t seem quite healthy, or sane, to keep writing in journals that depicted my dead husband’s face on them, but I wasn’t about to throw that last one away, either. I’ve been writing in it for the last two years, but I was bound and determined to complete it by the time I hit the five-year anniversary of David’s death on March 27.

It was with some anticipation and excitement I pulled out my remaining journals, laying them out on the floor. Which one would I choose?  The two with my photo on are more than five years old. One of me wielding scissors is from the first couponing workshop I did at NICC in Dubuque, a workshop that will be resurrected this fall. Two others have a photo of my private writing area during the winter of 2010-2011, after my mother’s death. My husband would watch the kids while I utilized her empty house to finish up a book and write many essays. Then there are the journals with the photo of the butterfly that fell out of David’s coat as I was taking it off the clothesline the October after his death.  (a butterfly I was later informed is called a ‘widow’s cloak”)

I have no desire to utilize either of the journals that bear my photo on the cover. I’m not sure what I was thinking when I made them, whether I thought I’d use them to take notes in, or what, but I don’t care to use them now.  I’m obviously very happy in the coupon-clipping picture; beginning a new venture of teaching workshops. My beloved husband sat behind the photographer that evening, beaming with pride. I can recall the moment with a startling clarity. I was eager to speak on one of my passions, excited to be hired by a community college, and grateful to have my husband there to share the moment with me. I can’t look at my eyes in that photo without wondering if I’ll ever feel that sort of joyful abandon again.

I decided my new journal would either have to be the one with my mother’s table or the butterfly photo.

It turns out, I didn’t have to choose. The right  journal chose me. When I flipped through the pages, I was surprised to discover I’d already begun writing in one of them a year after my mother’s death. 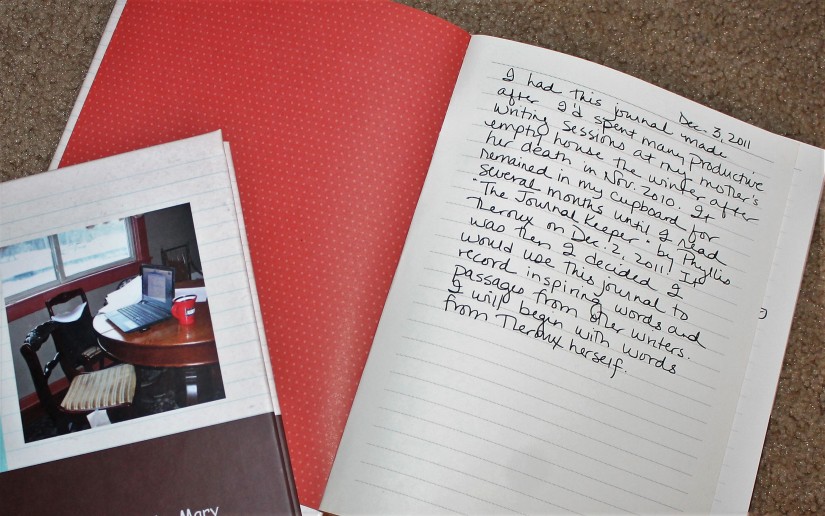 After Mom died, I became at least a “keeper of her words” with the Memory Book she’d filled out for me, letters she had written my grandmother in the 60’s that she’d bestowed upon me, and several unpublished manuscripts and notebooks she’d left behind. Most of her writing bore a similar theme; getting to Heaven and the importance of utilizing God-given talents. More than anything, my mother desired those two things for each of her ten children, referring to them repeatedly in her writing.  I took her words to heart, vowing to full-fill her wishes.

Working alone in her empty house seemed to fuel my creativity in ways that I couldn’t fully explain. So much so, I worried I’d lose my muse when I lost the tenuous hold her house had on me. Instead, creativity begat more creativity, and I kept up the prolific writing even after I no longer had a personal writing retreat. It was in honor of my creative mother that I signed up for my first writer’s conference, began a newspaper job, and started teaching classes and workshops. One of those workshops, “Utilizing Your Talents in Your Everyday Life,” included slides of my mother’s artwork and the story behind her artistic endeavors, along with encouragement for all women to discover and hone their talents. The intention was that workshop would eventually become a book that would include photos of Mom’s work.

In the journal I began in December 2011, I discovered I’d filled approximately 20 pages with inspirational and meaningful quotes from other authors, beginning with some from Phyllis Theroux’s “The Journal Keeper.” About her mother dying, she’d written:

“Thinking about Mother, I compare her to the late stage of a dandelion. All the earlier, fleshy brilliance is gone. Now she is a fluffy globe of light, holding herself erect as ever but ready, with one puff, to fly away, be gone.” -from “The Journal Keeper,” page 39

My mother, too, became a “fluffy globe of light” after her cancer diagnosis, facing cancer treatment and the inevitable outcome with grace and strength.

“A new thought- that writing is not only a reflection of what one thinks and feels but a rope one weaves with words that can lower you below or hoist you above the surface of your life, enabling you to go deeper or higher than you would otherwise go. What excited me about this metaphor is that it makes writing much more of a lifesaving venture.”- from “The Journal Keeper,” page 144

I certainly discovered the truth of that in the journaling I did that first year after my husband’s death, and have since learned the science behind utilizing expressive writing as a tool in healing.

Then there is this, from the book “Thin Places” by Mary Demuth:

I have this little idea that worms its way through my head, that perhaps God is redeeming my father’s writing through my pen. He’s completing my father’s genius in me, but He’s doing it through my own frailty. I’m no genius. I’m a mess half the time. But God’s great work of redemption spans the generations. When I put words to the page, I wonder if my Dad can see me. Does he smile?”

I sometimes wonder the same thing about my mother and husband. When I pick up my pen, or stand in front of an audience, are they smiling down on me?

It was still dark out when I walked down to my daughter and son-in-law’s house to babysit two of my grandchildren while they took Jacob for a three-month post-cancer CT scan. (which turned out all clear, praise God) Before I left home, I grabbed a cup of coffee, my writing bag and a book off my “to-read” shelf.  Three-year-old Joseph (aka Jo-Jo) woke up before his parent’s left and allowed me to snuggle with him on the couch. While he watched a cartoon, I started reading The Journal Keeper by Phyllis Theroux. Few authors have spoken so many of my own thoughts about writing and about losing someone so well. Madeleine L’Engle was another.  I yearned for Post-It notes to mark passages. I wanted my own journal to jot down pertinent paragraphs and sentiments. Nuggets of wisdom like this:

‘Thinking about Mother, I compare her to the late stage of a dandelion. All the earlier, fleshy brilliance is gone. Now she is a fluffy globe of light, holding herself erect as ever but ready, with one puff, to fly away, be gone.” (page 39)

That was my mother, after her cancer diagnosis.

“Whenever I think of Mom, I can’t help feeling somewhat inferior to her. By temperament and spiritual habits, she was more refined than I am. It would not make her happy for me to be thinking this way, and I am, in fact, grateful that she left behind such an astonishing life to emulate and love. But it is daunting to feel that so large a mountain remains for me to climb. By slipping over the top, she compels me to follow.” (page 167)

I finished over half the book with Jo-Jo in my lap. Later in the day, while I played cars with him for what seemed an interminable amount of time, I couldn’t wait to get back to the book. The irony did not escape me; wanting to hurry up some precious moments with my grandson in order to get back to reading a book that reinforced the importance of living in the moment. Determined to do exactly that, I played yet another round of “push the cars back and forth, while making appropriate vroom noises.” My patience was rewarded. By 2:00 in the afternoon he was sleeping in my arms once again and I finished the book.

When I got home last night I rushed to my cabinet where I had stored this lovely journal until I knew its purpose. On the front is a picture from my mother’s house last winter. Her table and chairs where I spent so many writing sessions after her death. My laptop, piles of papers, and a bright red cup of hot tea. In the background, you can see the snow through the windows. I will always treasure those months of writing in her empty house.

“Some days I can think of nothing worth writing down. Fortunately, I am not alone. By my chair, I keep a small, revolving collection of essays, spiritual autobiographies, poetry, and other writer’s journals to inspire me. When I’m out of fuel, they pull me out of the creek and into a broader, deeper river.” (page 275, The Journal Keeper, by Phyllis Theroux)

Now I know my journal’s purpose. I will begin writing down the inspiring words of others, so that I can refer to them when my muse runs dry.