This morning, during a quiet, contemplative time that seems so elusive these days, I pulled out my journal, and these pages fell to the floor. 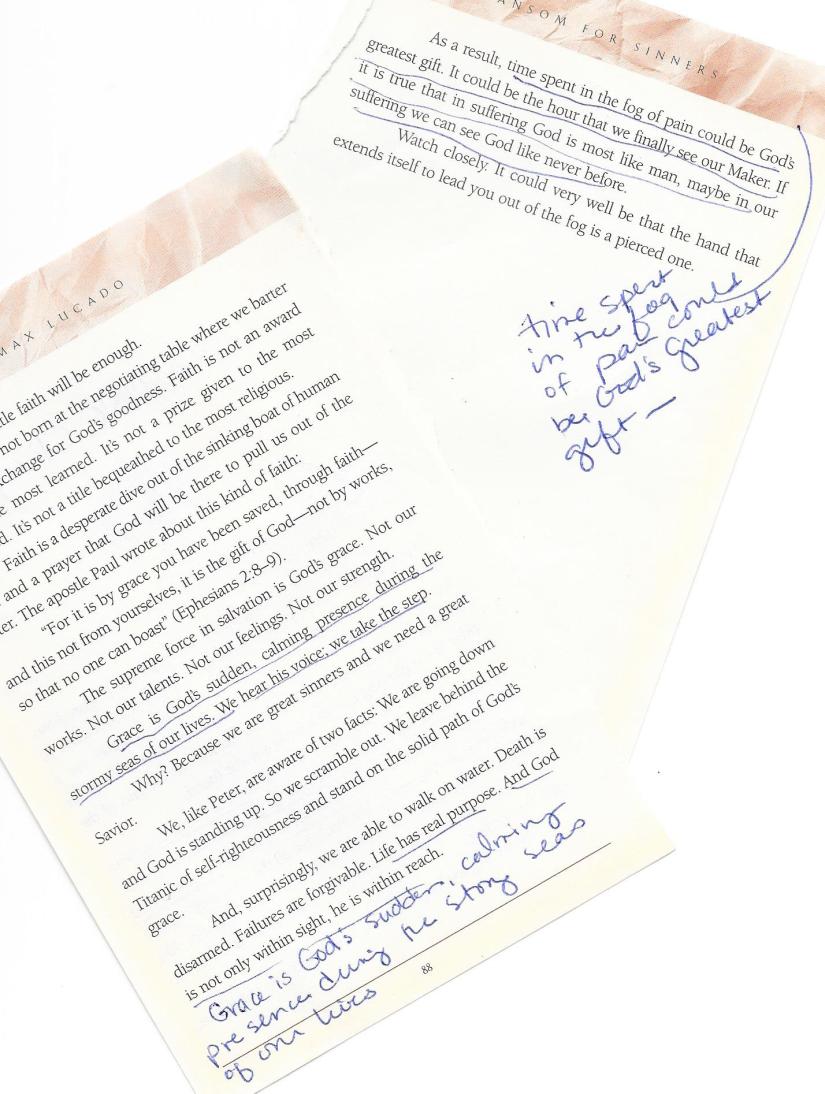 I’d torn them out of a book I can no longer remember the title of.

I can hear gasps of dismay from fellow book-lovers all over. Mary tore pages out of a book? Why?

It was May or June of 2013. My husband David had died the year before, and my seven-year-old grandson Jacob was losing his battle with cancer. Talk about walking around in a fog of pain. No one but those who have experienced this kind of anguish can understand it.

I had since given it away, but one of Max Lucado’s devotionals had been instrumental in helping me get through that first year of widowhood. (on a side note, I have purchased several copies of this devotional, and each time have felt led to give it away) 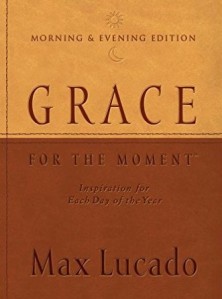 I was driving down the street that spring morning when I passed a yard sale that didn’t look at all enticing from the road, except for the fact that a young boy was handling the sales. Something compelled me to turn around and go back. Keep in mind that in many ways I was a new Christian. It was only after my husband’s death that I had learned what it was to listen to God, but by this time I could recognize the promptings of the Holy Spirit. I wandered around the yard, not finding anything,  a bit confused as to why I’d stopped. I started to walk back to my vehicle when I spotted it; a Max Lucado book laying on top of an empty milk crate. I instantly knew this was it; the reason behind the compulsion. The young boy had to go inside to ask his mother how much the book was. His reply when he came out didn’t really surprise me.

“Mom is sick so she didn’t finish pricing everything. She didn’t remember any books, but said if there is one, a quarter is fine.”

I handed the young man a dollar bill, telling him to keep the change for helping his mother. His smile would have been reason enough for my stop, but I knew there was more to it. I couldn’t wait until I got home before beginning to read the book. Instead, I sat inside my vehicle, turning pages. I didn’t even get through the prologue before pulling a pen out of my purse. Without hesitation, I began making notations in the margins. I had no doubt. These words were meant for me. I drank them in as though parched with thirst. 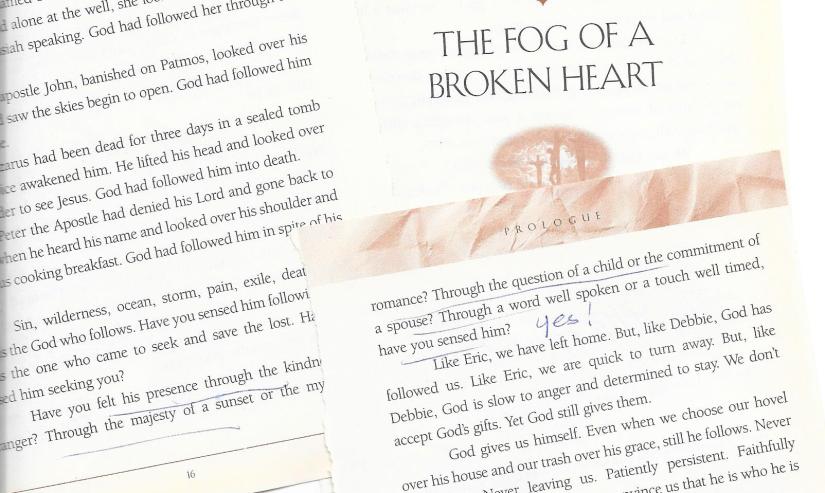 Page after page, I read Lucado’s words, words that spoke to my aching heart. Had I felt God’s presence during the past year after David’s death? Had I sensed God in the kindness of a stranger, through the majesty of a sunset, or a well-spoken word? Had I felt Him even in the darkness of Jacob’s diagnosis?

Yes, and yes. Even in this, in facing the loss of a beautiful little boy and the anguished eyes of my daughter Elizabeth and son-in-law Ben, I had felt it. I had felt God’s caring presence. I had experienced God’s sudden, calming presence in the face of the darkest storm. I could go on and face what was ahead only because of His goodness and His grace.

I devoured those words that afternoon, before giving the book to Elizabeth to read. Whether she got the same thing out of it, I don’t know, but it had been just what I needed that day. Instead of keeping an entire book I might never read again, I tore out the pages that had spoken to me, putting them in the journal that had become a testimony of sorts; a journal that clearly illustrated the spiritual journey the loss of my mother and husband had begun.

Keeping these pages in my journal ensures that I will look at them again, remembering what it was like to find a timely answer through the words of another writer. The kind of answers I continue to find in the kind and gentle smile of a stranger in the grocery store, in eagles soaring overhead during a visit to the cemetery, or what I’ve experienced most recently; through the uncanny connection of the soul with a woman I’m interviewing in my job as a reporter.

Are you going through a period of darkness? Have you glimpsed even a tiny pinprick of light? Have you felt it? His presence?

To know that you can might be all you need to hear today.

When we bought our house two years ago I’d immediately declared the trampoline in an adjacent yard off-limits to our children. “Trampolines are dangerous,” I warned.
It wasn’t a study by the American Academy of Pediatrics revealing an estimated 100,000 trampoline-related injuries each year prompting me to say this. While I was gratified to know the AAP supported my ban, it originated from personal experience.

As a youngster my arms and legs were always mottled with bruises, a testament to my clumsiness. I learned to ride a bike by first crashing into a hedge, then using our steep driveway for a downhill start, resulting in knees embedded with gravel and bloody palms. I dreaded physical education classes, when even in-sync jumping jacks with my classmates required intense concentration.
Then in 1974, some genius at our high school decided to substitute the traditional dodge ball, volleyball, and track for gymnastic equipment.

I vividly remember the feeling of daring mixed with raw fear when it was my turn on the trampoline. I’d already proven to be totally inept with the balance beam and parallel bars.  I warily eyed the flimsy-looking structure, then the hard gym floor below.
My instructor hesitated briefly before encouraging me; “Go ahead, try it. Nothing can happen.”
The perimeter of the trampoline was completely surrounded by my peers, strategically placed as spotters in case someone should lose their balance. The teacher was right. What could possibly go wrong?  I got on and tentatively jumped once, then twice, bouncing softly each time I landed. With a huge grin spreading across my face, I jumped higher and higher.
That day, for five short minutes, I knew what it was like to soar through the air and fly. It was truly a moment of grace.

Just as I heard the call that my time was up, I lost my footing, landed on one heel and hurled backwards like a torpedo.  Slamming against a coiled metal spring, a swift pain shot through my back. I heard a collective gasp from the incompetent team of spotters. Dazed, my eyes met my teacher’s and I saw her distinct annoyance before she curtly excused me to the nurse’s office. When the pain persisted for several days my parents took me in for x-rays that revealed little, but netted me an excuse from P.E. for the rest of the year. I was thrilled with the reprieve and spent the extra hour delving into my real interests; reading and writing.
Besides being an avid reader and prolific writer, it was around this time I also discovered I had a flair for drama. On stage, I was transformed into whatever character I played. I became a young, and oddly very coordinated, Dorothy skipping down the yellow brick road, an overweight middle-aged woman with a stuffed bra and well-padded rear, or a rich, poised daughter who drove her parents crazy with elaborate wedding plans.

My real wedding came a year after high-school graduation, to a man I met at the restaurant where I worked the summer before college. As his waitress, I’d accidentally splashed coffee on him when I noted his obvious interest. He’d laughed and asked me out, where I proceeded to spill a glass of iced tea in his lap on one of our first dates. He found my nervousness endearing and eventually proposed, without weighing any possible hereditary propensity toward clumsiness in future offspring.

Now we have eight children. I winced and worried as one toddler continually slammed her head on end tables, another ran into glass doors and tipped over grocery carts, and a son grew so fast during puberty he couldn’t keep up with the long limbs that got in his way. I reveled in the daughter who took to skateboarding and roller skating, a son who learned to ride a bike at age 2 ½, and another who taught himself to swim. With time and ample practice, all my children have grown comfortably and confidently in their own skin, though none became the athlete their dad pined for.

I am now that middle-aged, overweight woman I once played on stage. I still do not personify any of the definitions of gracefulness but with half a century of life  behind me, I’ve found I possess something akin to grace. I graduated from college amidst mothering small children, endured two years of a chronic illness, and kept my family afloat during my husband’s 18-month stint of unemployment. But the experience of caring for a spouse with cancer was the catalyst for my learning to take care of myself. During my husband David’s grueling regimen of surgery, chemotherapy and radiation, I did things I never imagined myself doing. I changed bloody dressings, gave him liquid feedings through a stomach tube, and doled out medications, all while continuing to care for my young children and running a household.

On the day David was finally able to return to work I took a good long look at myself in the bathroom mirror, then  promptly burst into tears. I looked every bit my age. I was old, tired, out of shape, and emotionally drained. With my husband’s encouragement, I joined a women’s gym. Lifting weights and exercising long-neglected muscles left me stronger and more confident than I had been in years. After we moved and settled into our new home, I started walking several mornings a week with my sister and slowly but surely lost 20 pounds. These small accomplishments, along with my life experiences have given me the self-assurance I longed for when young.
Now I have learned to find grace in the ordinary of my days; in smoothing and clipping wet towels to the clothesline for a softening breeze, riding the bike trail near my home, walking in the drizzle of a summer morning rain, or holding my husband’s hand as I fall asleep and realizing how blessed I am to still have him.

When the inevitable invitation to jump on the neighbor’s trampoline was extended to our two youngest girls my husband was watching from the kitchen window. Before engaging in the forbidden sport, Katie and Abby looked around stealthily, then scrambled up the side and began wildly bouncing. By the time David headed out the door, they’d gotten down. But when four-year-old Abby saw him approaching, she stood in indecision, then quickly scurried back onto the trampoline to get in a few more manic bounces before her daddy grabbed her.

I know just how she felt. As I navigate the second half of my life I, too, want to get a few more bounces in before it’s all over. I want to hold more grandbabies, celebrate more weddings, share more laughter with my husband and children. And, yes, I want my children to experience new things and learn the lessons about love and grace long before I did.

Just not on a trampoline.