What do the things we choose to keep say about us?

I recently shared a mixed media piece I created using objects that had either been my mother’s or reminded me of my mother, a project directly related to the theme of my upcoming book, Called to Be Creative.

Most of the those small mementos had been stored away in drawers and boxes. I love having them displayed where I can see them  now. Since then, I’ve been collecting items that remind me of my husband David; things like the last piece of jewelry he purchased for me, the tiger pin I wore when I was a waitress at Sambos, (where we met), and our 25th anniversary newspaper announcement. I’m planning an artist-facilitated “Memory Mixed Media” program at my workplace in February, when I’ll complete the project. 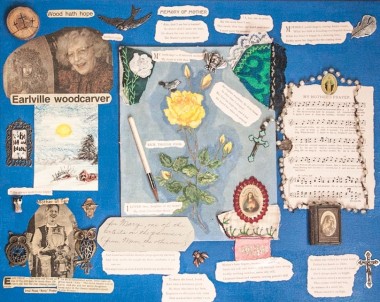 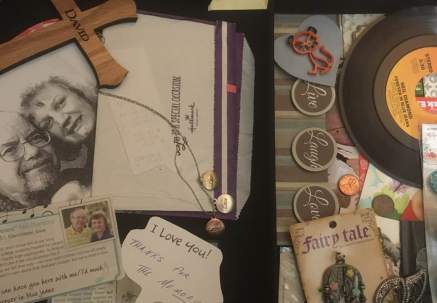 With all the talk today of the Kon-Mari method of decluttering and the value of simplifying our lives and homes, why save any memorabilia at all? These art pieces take me on a sentimental journey, reminding me of two very special people I loved, the mother who was the muse for my creativity, and the husband who encouraged me to spread my wings and fly in my endeavors.

What does it say about me that when I faced a move to a 760-square foot house in the summer of 2018, I easily parted with thousands of items; pieces of furniture, clothing, hundreds of books, home decorations small and large, but sifting through piles of paper, files, photos, and letters seemed an impossible task? At least two of the things I chose to keep, my mother’s cabinet and trunk, were with the intention of storing other things. 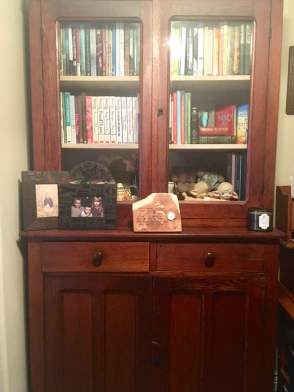 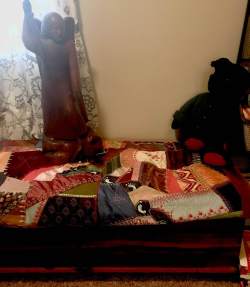 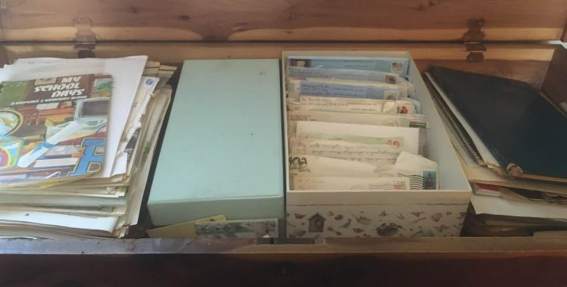 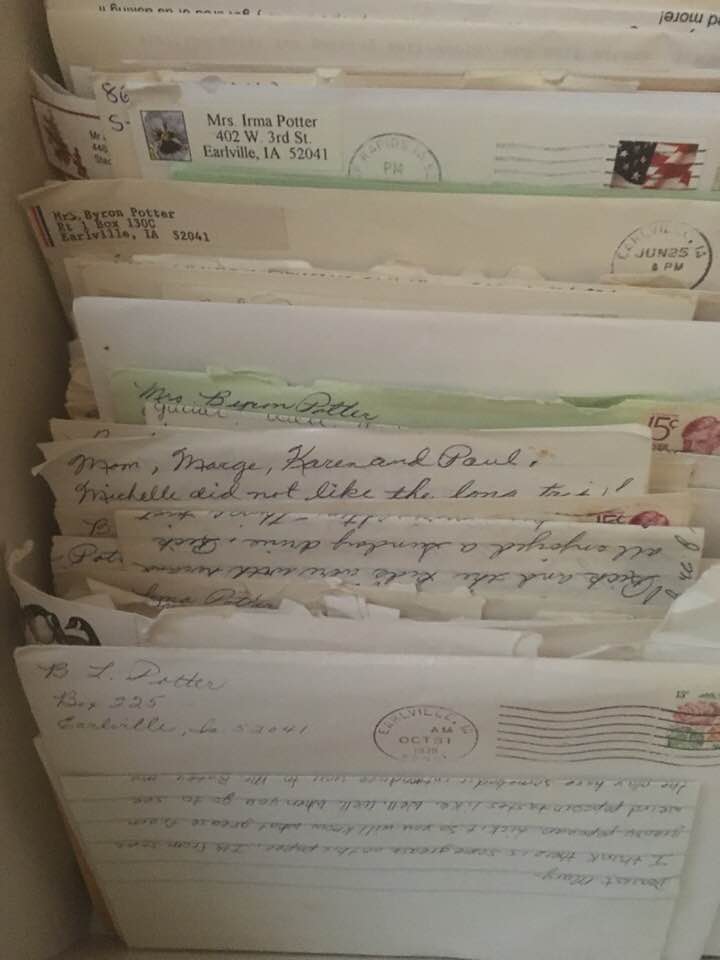 What does it mean that I saved every letter my mother had ever written me, the few my father did, and many I’ve received from siblings?

Until the winter of 2017, I hadn’t re-read Mom’s letters, but as I prepared to write a book chronicling the creative legacy she’d left behind, I did. In fact, I immersed myself in all things Mom, re-reading letters, her memory book, and notebooks, searching for nuggets of wisdom, like this, to share in the manuscript.

Much of Mom’s words that appear in the book will be shared in her own handwriting because of what I kept.

In downsizing, I did manage to dispose of hundreds of greeting cards that had no personal message, only a signature. Because I saved others, I still have my very first “fan letter,” sent to me care of my publisher in 1996, after the release of Homeschooling From Scratch. I also have the birthday card my pen friend and prayer warrior Pam Pierre sent me on the first birthday I celebrated without my mother, which also happened to be the anniversary of Mom’s death. That was the last note I received from Pam before she herself died unexpectedly. 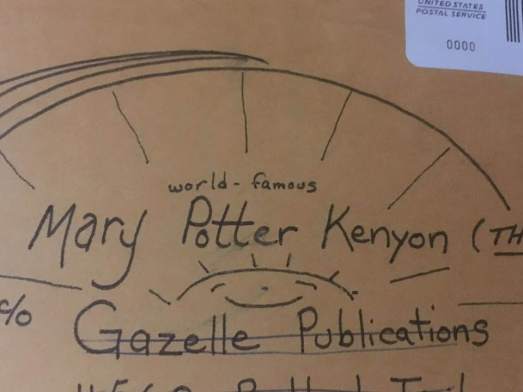 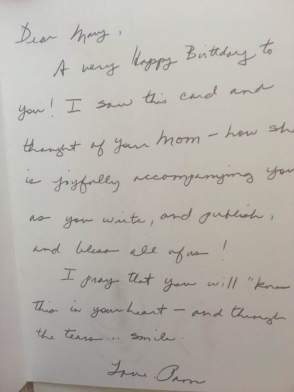 I also chose to keep the ledger my mother utilized to keep track of her art sales. I’d flipped through those pages in 2017, marveling at her detailed notes and wondering how she kept track of the art work she’d done after the final listing of a courthouse carving in 1996. Surely an artist who’d carefully numbered her pieces, from the first wood carving at age 42 would have continued the tracking? Perhaps she’d done so elsewhere, in a notebook I didn’t have? I wrote about this in my book:

“If midlife means the mid-point of one’s lifespan, my mother hit hers at forty-one, a year before she’d picked up a hammer and chisel to create her first woodcarving. In the ensuing thirty years, Irma “Amy” Potter would produce 544 pieces of art, according to a ledger that tracked each piece. The entries are not dated, but begin with the first woodcarving in 1970 and end with the relief woodcarving that was commissioned for the Delaware County courthouse in 1996. Anything Mom had crafted before the age forty-two—the wall-hangings, pastel pictures, quilts, or homemade dolls—were not included in this tally. Neither was the body of work she continued to produce between 1996 and her death in 2010. That includes countless pillows, teddy bears, baby quilts, Christmas stockings, handmade ornaments, a painting that hangs in Breitbach’s restaurant in Balltown, Iowa, lavishly-designed walls my sister Pat commissioned Mom to paint in 2001 in the lower level of her Treasure Alley consignment store, along with numerous paintings and wood-carvings now displayed in homes of family members and strangers.

I could not begin to guess how many additional pieces of art my mother produced in those last fourteen years of her life, or why she stopped keeping the log, but suffice it to say, my mother was a prolific artist in the second half of her life.”

It was only yesterday, nine years after the death of my mother, as I searched the trunk for memorabilia to include in my next art project, I picked up the ledger again. Studying those pages of neat handwriting and record-keeping, I marveled at the low prices she charged for her work. Hours of toil on an owl carving amounted to a single ten dollar bill. Four small owls she sold to “David and Mary Kenyon” (me), less than that. I wondered again at that last notation. Why had she stopped keeping track? I flipped through the empty pages until something caught my eye; a lightly penciled notation on an otherwise empty page.

So, Mom had noted her mural work on the walls of my sister’s shop, though without a date. I flipped through a few more empty pages amazed to discover there were further records at the back of the ledger! 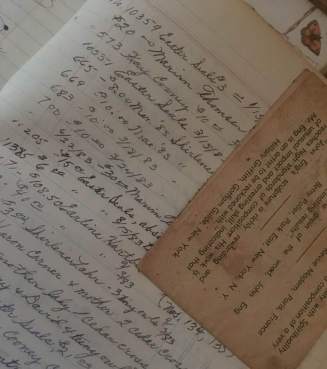 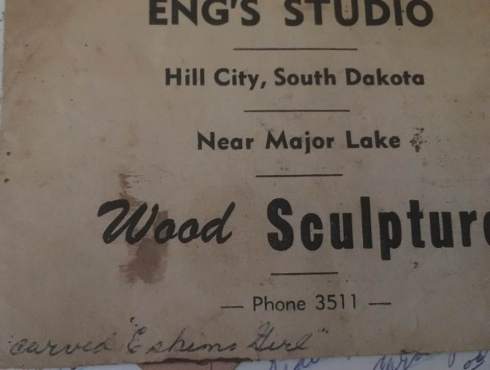 This list, unlike the beginning of the ledger, was not in chronological order. Many were numbers from the previous list, but some were newer, including a piece numbered 1040 (suggesting she’d completed at least another 500). An ad from a South Dakota studio was paper-clipped to the page. Did the Eng studio owner order the “carved Eskimo Girl” my mother noted, or did she own a “carved Eskimo Girl” by the artist? I’m fascinated by either scenario. (I later searched the Internet and discovered that Marion Eng, the co-owner, had passed away within days of my mother)

This. This is why I keep these sorts of things; the letters, a ledger, a list. Pieces of paper to some, precious treasures to me. A rosary, a pencil, a penny dated 1978. My mother wrote this. She drew with this pencil, prayed on this rosary. My husband kept this receipt for my wedding ring, he cherished this Valentine from his grandson fighting cancer. He wrote this note proclaiming his love and chose that necklace for me. Each foray into the trunk or cabinet, a warm hug. Each letter re-read, a visit with the beloved mother.

And sometimes, a surprise… a few previously unread pages, a clipping, a question unanswered. Who carved “Eskimo girl” and where is she?

If I ever find her, I’ll probably keep her too.

A graduate of the University of Northern Iowa, Mary Potter Kenyon is a certified grief educator trained under world-renowned grief expert David Kessler, a Therapeutic Art Coach and author of seven books. She is a public speaker and workshop presenter for art centers, churches, community colleges, libraries, women's groups, grief support groups, and writing conferences on the topics of writing, couponing, utilizing your creativity in everyday life, and finding hope in grief. Her books include "Coupon Crazy: The Science, the Savings, and the Stories Behind America's Extreme Obsession," "Chemo-Therapist: How Cancer Cured a Marriage," "Refined By Fire: A Journey of Grief and Grace," "Mary & Me: A Lasting Link Through Ink," co-written with Mary Jedlicka Humston, "Expressive Writing for Healing," and "Called to Be Creative: A Guide to Reigniting Your Creativity." View all posts by Mary Potter Kenyon

4 thoughts on “What We Keep”